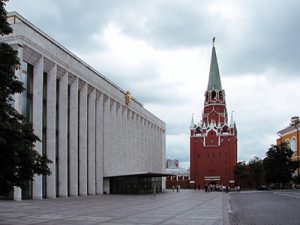 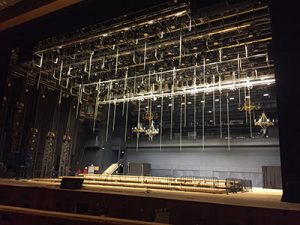 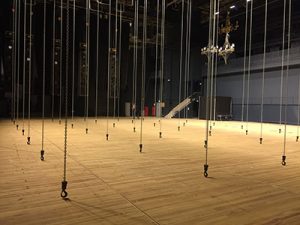 25 years since the market launch of CHAINMASTER products, the Saxon-based company has developed into one of the world’s leading manufacturers of hoist technology in the event industry, offering a comprehensive range of products for all requirements from set-up operations to complex scenic movements to the complete automation of performances in theatres and opera houses around the globe.

In 2004 CHAINMASTER founded the Consulting Office Russia / EAEU under the leadership of Slawa Serdyukov. Over the past 15 years, the sales network has been expanded and numerous projects successfully implemented, including the Zaryadye Concert Hall, the Helicon Theater and the 2014 Olympic Games in Sochi.

Another exceptional project in the area of theatre installation is the renovation of the over stage machinery in the Kremlin State Palace Theatre in Moscow. In 2003, CHAINMASTER delivered a computer-controlled chain hoist system, which, after 15 years of reliable work, was replaced in 2018 by the current XYZ Control System that complies with SIL3. The system includes 40 CHAINMASTER BGV-C1 SIL3 VarioLifts with a load capacity of 500 kg and infinitely variable speed of 0–19 m / min at a lifting height of 35 m.

The XYZ Control System, which is certified for scenic operation, was modified at the customer’s request and consists of two independently operating control units, which can be connected to several plug-in points in the theatre. This year, the theatre is expanding the chain hoist system by a further 14 identical drives to a total of 54 chain hoists. The technical execution is being carried out by the partner companies SIM and Stroyscirc and should be completed by the end of the year. 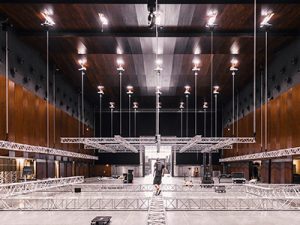 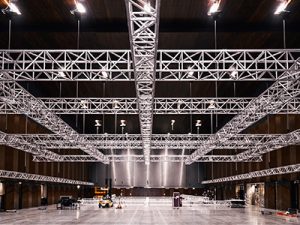 Since the market launch of CHAINMASTER products in 1994, the Saxon-based medium-sized company has developed into one of the world’s leading manufacturers of hoist technology in the event industry and offers a comprehensive range of products for all requirements from set-up operations to complex scenic movements to complete automation of performances. National and international projects are accompanied individually from planning to implementation as well as user training. The worldwide network of CHAINMASTER Consulting Offices, commercial partners and trained service companies guarantees comprehensive after-sales service.

In August 2019, CHAINMASTER delivered a new chain hoist system to its long-standing Austrian sales partner A.T.C GmbH, based in Wulkaprodersdorf, Austria. A.T.C GmbH carried out the assembly and installation of the system on site in the Helmut List hall in Graz.

For this project, CHAINMASTER supplied 38 VarioLifts 1000 kg with a two-fall design and a continuously variable speed up to 4.8 m/min and a maximum lifting height of 12 m. The drives are controlled by the XYZ control system, certified according to EN/IEC 61508 SIL3. The control system is currently designed for a maximum of 42 drives. The system is operated via a control panel with a 19″ touch screen, equipped with two travel levers with deadman switch. Two safety computers with self-monitoring and Internet access for remote maintenance operate in the background of the control system.

The CHAINMASTER XYZ Control System is ideal for creating complex motion sequences and is therefore a reliable interface between operator and stage drives. The straightforward user interface and the practical configuration of the functions enable simple and intuitive operation at the highest level of safety with constant access to the hoists integrated in the system.

To control the chain hoists, the Helmut List hall is equipped with a control cabinet system of six units each for four drives and six units for three drives. Equipped with state-of-the-art closed-loop frequency converters, high-resolution displacement sensors and safe load evaluation enable programmable start and stop ramps, full torque at standstill over several minutes, direction changes without interruptions and make the CHAINMASTER Variolifts a hoist of the highest performance. 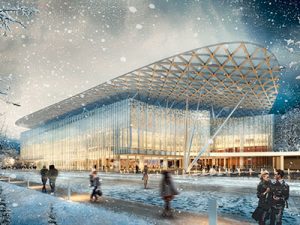 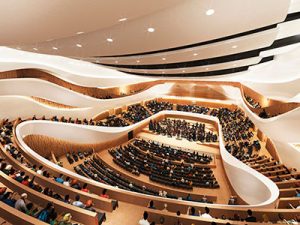 Twenty-five years after the launch of CHAINMASTER products, the company based in Saxony, Germany, has grown to become one of the world’s leading manufacturers of hoist technology in the event industry, offering a comprehensive range of products for everything from set-up operations and complex scenic movements, to complete automation of theater and opera house performances around the globe.

The latest reference projects for the chain hoist specialists from Eilenburg include the Zaryadye Concert Hall and the Helicon Theater in Moscow, Russia. For the Zaryadye Concert Hall, twenty-four chain hoists with 500 kg load capacity and twenty chain hoists with 1000 kg load capacity were integrated into the existing in-house control system. The new hoists are equipped with absolute value encoders and load measuring cells and comply with DGUV V17 (formerly BGV-C1). The installation was carried out by the local sales and installation partners Stroyscirc and Doka Center. In the Helicon Theater, they decided on a chain hoist system for the set-up operation in accordance with DGUV V17. The system consists of thirty-two chain hoists with 500kg load capacity and a CHAINMASTER Protouch StageOperator control. The technical implementation also was realized by Doka Center.

In the course of the modernization of the Gessneralle Theater in Zurich, twenty-eight existing BGV-C1 chain hoists with a load capacity of 800kg were updated. The choice was made to install the Protouch StageOperator system here as well. The chain hoists were equipped with incremental encoders and load-measuring shackles in the Eilenburg factory and subjected to a UVV (accident prevention regulations) test before reinstallation. CHAINMASTER offers a variety of upgrade solutions for existing first-generation chain hoists, ranging from set-up operations to SIL3-certified scenic use, to allow customers to further utilize their hoists.

Another outstanding project in the field of theater installation is the renovation of the overhead machinery in the Kremlin State Palace Theater Moscow. In 2003, CHAINMASTER supplied a chain hoist system with computer control, which, after 15 years of reliable work, is being replaced by the current SIL3-certified XYZ Control System. The number of chain hoists has increased from forty fixed-speed drives to fifty-four new drives with 500kg load capacity and variable speed control up to 19m/min. The technical implementation is being carried out by the partner companies SIM and Stroyscirc and should be completed by the end of the year.

MAJOR PROJECT FOR CHAINMASTER AT THE OLYMPICS IN SOCHI 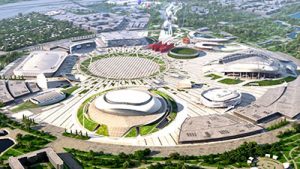 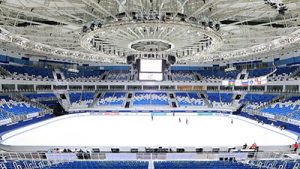 In addition to several smaller projects, CHAINMASTER’s activities in Sochi have mainly centred on equipping the Bolshoy Ice Dome and the Iceberg Skating Palace, each of which is capable of accommodating up to 12,000 spectators. It is planned to stage the ice hockey matches in the Bolshoy Ice Dome and the artistic and short track ice skating events in the Iceberg Skating Palace.
In each of these arenas, CHAINMASTER equipment forms part of a variety of installations – most notably the system for raising and lowering the two giant video cubes. Here, safety was the paramount concern governing the choice of equipment, the objects in question being extremely heavy. Four CHAINMASTER dual-chain BGV D8 Jumbo Lifts capable of lifting safely up to twelve tons have therefore been assigned to each cube.

Designed for heavy loads, these hoists are controlled using a Pro Touch StageOperator solution from the CM 880 series, which boasts load measurement and user-friendly positioning functions. The CM 880 series displays loads and positions continuously, the overload and underload thresholds being freely configurable. Furthermore the system offers synchronous run supervision for fixed-speed chain hoists as well as the possibility of programing both relative and absolute target runs for single, line and distributed loads. Safe hoisting of the loads is therefore assured even when, as is here the case, they are being raised to heights in excess of 30 metres.

In the Bolshoy Ice Dome, CHAINMASTER also provided the pre-rig for the flag system typically seen at international sporting events. For this, the company’s experts installed 108 CHAINMASTER D8 Plus rigging lifts, each with a safe working load of 250 kg and a limit switch function, governed by an 128-channel control system from the CM 801 series.

In the Iceberg Skating Palace, CHAINMASTER also paved the way for the rigging of the sound system and structure of lighting trusses. For the audio system, four CHAINMASTER D8 hoists with dual brakes combined with the CHAINMASTER Pro Touch StageOperator were used, whilst for the lighting trusses, the specialists from Eilenburg opted for sixty CHAINMASTER D8 rigging lifts with brake functions controlled by a 64-channel system from the CM 801 series.

The controllers of the CM 801 series offer, depending upon the requirement profile, central and de-centralized control systems assembled from more than 40 components that are all compatible with one another, such as motor distributors and operating elements. They are suitable for the direct control of all CHAINMASTER D8/D8 Plus chain hoists.
All the material supplied will remain in use when the Winter Olympics are over, as it can be employed in a very wide variety of configurations without any conversion measures being required. Furthermore, the CM 801 series is upwards compatible with the CM 880 series, which opens the door to still further possible uses. 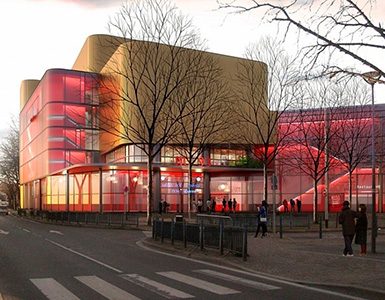 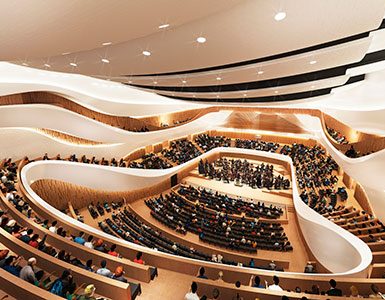 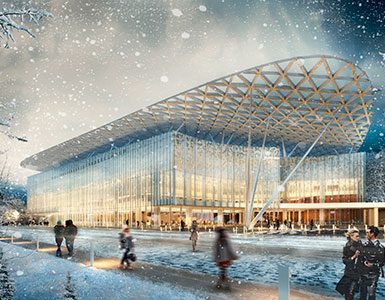 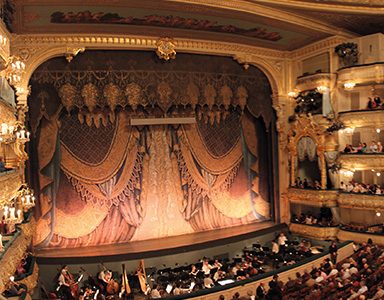 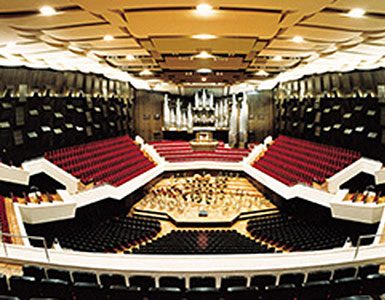 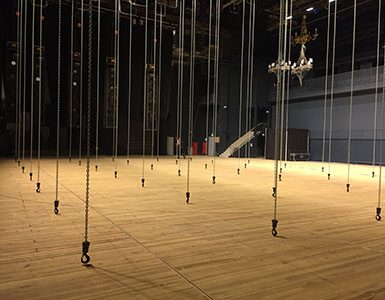 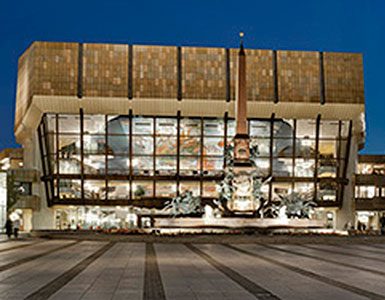 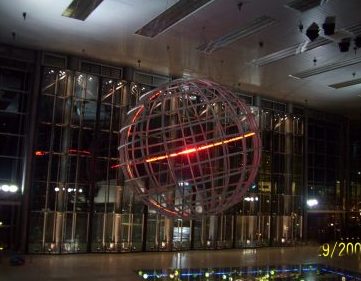